HomeWho We AreEmerging Risks Insurers Are Watching — and So Should You

Emerging Risks Insurers Are Watching — and So Should You

Emerging risks are a mixture of perception and reality. If you asked executives in 1999 to name one of their top 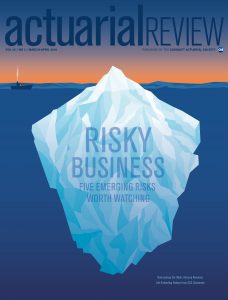 The experts weigh in on emerging risks.

concerns, many would have answered Y2K. It turned out Y2K caused a lot of hysteria and a lot of computer consultants made a ton in the process.

Then there are the risks that people don’t perceive but insurers do. Auto insurers know most accidents take place within a five-mile radius of the home. Drivers do not think about that when getting on the road.

Insurers, actuaries, risk managers and world leaders see emerging risks from the broader perspective. Insurers have to think ahead to figure out which emerging risks they can cover and the cost.

My most recent Actuarial Review article considers three recent surveys to break down five emerging risks from the insurance and business perspective. Consumers can benefit from the article as well.

Climate change bypassed cyber risk as the largest emerging risk of concern. One source said off the record that this is largely due to news coverage on climate change that showcases the evidence of rising sea levels. (Yeah, I covered that too.)

The insurance industry has to anticipate what is possible to make contingencies. Unfortunately, fear-mongering politicians are muddying the public climate change conversation. I am thinking of two in particular. They warn of doom in 12 years if we do not act now. Thankfully, the Associated Press fact-checked the 12-year claim and wrote, “There is no scientific consensus, much less unanimity, that the planet only has 12 years to fix the problem.”

All nations should be doing their part to take care of the planet. But my largest concern relates to cyber risk and unintended consequences of emerging technologies. Insurance executives do as well, ranking cyber risk second among emerging risks. (Covered cyber too.)

An Emerging Risk for Consumers

From a consumer standpoint, I see one big risk: data privacy. We unwittingly gave away a lot of personal information by participating in social media, “trusted” websites, DNA testing…the list goes on. Suppose personal data lands in the “wrong hands.” Just look back at history, assume it repeats itself, add in personal data and play it forward.

I am hopeful about the California version of Europe’s General Data Protection Regulation, which is to go into effect next year. However, if the Silicon Valley companies (I won’t say who they are I will just point) can successfully lobby lawmakers, it might lose some teeth.

Which emerging risks concern you and why?