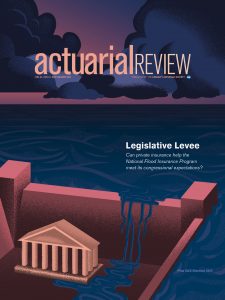 Unfortunately, there is little time for overall vision when Congress must approve the reauthorization of the National Flood Insurance Program (NFIP) by September 30th. Since my article crystallizes many of the issues concerning flood insurance, my hope is it will encourage greater public policy discussion.

Right now, most homeowners and small businesses can obtain flood insurance only through NFIP. That’s because, in general, private insurers could not profitably offer flood insurance when the NFIP got started in 1969.

Congress began the NFIP not only to provide flood insurance, but to meet specific congressional objectives that are sometimes contradictory. The idea behind the NFIP is to make coverage for weather-related flooding both affordable and available for homeowners, renters and small businesses. Public policy objectives also include reducing the taxpayer burden when the federal government needs to help victims suffering from flood losses.

While criticism of the NFIP abounds, keep in mind that for the past five decades, the NFIP has been better than nothing. Private insurers were also kept out of the market starting in the 1970s. That’s because federally backed home mortgages require purchasing flood insurance from the NFIP when these properties are in a flood zone.

But now, there is a sizable amount of homeowners insurers that want to offer flood insurance again. The inspiration stems from significant recent developments. Not only do new weather and insurance models show promise of revealing profitable customers, but can also improve upon the NFIP’s more general approach to developing premiums. Reinsurers looking to diversify their portfolios are also willing to back insurance companies.

The implications of introducing private insurers into a market dominated by the NFIP are vast. That’s why changing how consumers can obtain flood insurance requires vision. The potential of Americans being able to have coverage for flooding regardless of cause in and of itself would be a big advantage. Too many Americans simply do not realize they need flood insurance. (This fails a congressional objective of ensuring as many Americans as possible are covered for external flooding.)

One major reason for misunderstanding stems from the maps the Federal Emergency Management Agency (FEMA) produces. (FEMA is the NFIP’s governing agency.) Too many Americans falsely believe their properties are safe if they are not in a FEMA flood zone. However, most homes can fall victim to external flooding for a myriad of reasons. For example, while not in a FEMA flood zone, my first home’s basement flooded when too much rain saturated the ground around my house.

In the United States, flood insurance requires vision because entry of the private market would likely change the NFIP’s role. In short, the NFIP could become the market of last resort, thus limiting the agency’s ability to meet congressional mandates.

Currently, the NFIP relies on “profitable” policyholders to help subsidize other customers and reduce the NFIP’s $24+ billion debt to the United States Treasury. If the NFIP losses enough of those policyholders to private insurers, the agency would be hard pressed to meet its congressional mandates.

At the same time, the benefits to customers, including paying rates truer to their actual risk of flooding and being fully covered for flood damage, are too tempting to ignore. The private insurance market could also expand the population of covered property owners. That would help meet the congressional directive of making sure Americans who need flood insurance would have it.

If the NFIP cannot meet its mandates, taxpayers are likely to pick up the costs of paying down the debt to the United States Treasury. (That would kill one congressional directive.) The insurance industry has made it clear it has no interest in subsidizing rates as they do in some states for auto insurance.

These are just some reasons why developing a private/public partnership for flood insurance requires vision. My article digs deeper into the public policy objectives for the NFIP, which also must be understood when contemplating a great infusion of private insurers into the external flood market.

There are also several unknowns pertaining to private insurers offering flood coverage. For starters, the profit margins are unclear. Potentially subsidizing risks could mean lowering the profit incentive. The new weather models are largely untested by homeowners and renters insurers in the United States. If major flooding events continue, it could turn out that private insurers will have to raise rates to a point where insurance becomes unavailable once again for too many consumers.

There is also the regulatory conflict. Congress primarily controls the NFIP. Allowing politics to affect the NFIP has led to premium inequities and delay for meeting financial goals. The NFIP could also more greatly benefit from the new weather and insurance models to compete against private insurance companies. However, the agency lacks the agility that private insurers enjoy because it is dependent on congressional timing. Private insurers would be regulated by state insurance regulators, who have much more insurance experience than Congress.

Simply supporting private insurers to compete against the NFIP is does not answer all the public policy considerations that led to to the agency’s existence the first place. The NFIP and insurers would be playing the market game with different rules and requirements.

That’s why flood insurance requires vision to ensure public policy objectives are met as private insurers enter the market. Unfortunately, given the September 30th deadline to reauthorize the NFIP, there is little time for big picture conversations. The nation will likely witness a wait-and-see approach that supports an experiment to realize how private insurers benefit policyholders and taxpayers.

This promises to be messy, but the flood insurance situation is already that way.

To read my article on Hurricane Sandy’s effect on the NFIP, please click here.