Advanced driver assistance systems (ADAS) are helping drivers with reducing auto accidents and will impact the future of driverless cars, but there are limitations. 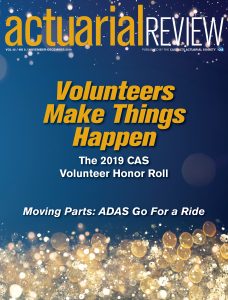 My latest article in Actuarial Review is a must-read for consumers and the insurance industry that serves them. Moving Parts: ADAS Go For a Ride moves beyond the generalizations to help readers understand the advantages and the multiple limitations of automatic safety parts.

My article also provides a one-of-a-kind sidebar that provides at-a-glance information per ADAS feature based on multiple sources. Trust me, it was not easy to assemble, so do enjoy!

The article also offers a more realistic consideration of the future of driverless car safety. The evolution of safety technology for conventional vehicles is not much different than for driverless cars.

This is a big deal. For the past five years, driverless car enthusiasts have stressed the future safety advantages of automated vehicles. It was backed up with faulty logic presuming that since most accidents are caused by humans, another misnomer, driverless cars would make the roads safer. (Please read my award-winning article about driverless cars for further explanation.)

It would have been better if driverless car advocates empathized convenience rather than safety. But here again, as both conventional vehicles and driverless cars evolve, their differences will probably be few over time. There is also a growing acknowledgment that drive-free cars might never come to fruition, requiring drivers as the final safety, ironically, when technology finds its limits.

ADAS is showing its mettle for preventing accidents. Any automation should be viewed as tools for drivers, rather than the replacement of drivers. After all, humans do not just cause accidents. They prevent accidents too.

0 Comments on "The Truth about Advanced Driver Assistance Systems (ADAS)"